Posted on October 20, 2014 by Thomas W. Dinsmore Leave a comment 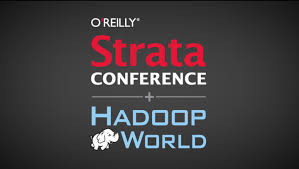 A sellout crowd of 5,500 met at the Javits Center in New York last week for the 2014 Strata + Hadoop World conference.  There were three major themes:

Big Data in Action.   In his keynote address, Mike Olson of Cloudera noted the shift from talking about “geeky projects like Pig, Sqoop and Oozie” to talking about applications, such as fraud detection, product design and agriculture.   An entire track in the conference featured success stories from companies such as Goldman Sachs, Transamerica, American Express, L.L. Bean, FICO and Kaiser Permanente.

Symbiosis of Analytics and Big Data.  Paul Zikopoulos of IBM observed that “Big Data without analytics is just a bunch of data.”   Zikopoulos drew an analogy to the mining industry, which uses advanced technology to extract trace amounts of valuable material from large quantities of low-grade ore; in Big Data, we use advanced analytics to extract useful insight from large quantities of low-value per byte data.  Conference sessions reflected the critical role analytic technology plays in the Big Data value chain.

Spark has arrived.  The 2013 conference included two sessions about Spark; this year, thirteen sessions featured Spark, including the sold-out full day Spark Camp.  Moreover, vendors such as ClearStory Data and Platfora openly touted Spark integration, in the belief that this capability resonates with buyers.  Other conference sponsors recently certified on Spark include Pentaho, Skytree, Tableau, Talend and Trifacta; and MapR announced a project to deliver Apache Drill on Spark.

Among the notable Spark sessions:

Advancing a theme he introduced last year, Olson speculated in his keynote that Hadoop will “disappear” this year because enterprises increasingly view Hadoop in the context of an overall data management strategy.  He cited the recent Teradata-Cloudera partnership as evidence of this trend.  That announcement is certainly significant, but it demonstrates the opposite of Olson’s high-level point; Teradata abandoned its exclusive relationship with Hortonworks because many of its customers prefer Cloudera to HDP, and they aren’t willing to switch simply because TD sells a “Unified Data Architecture.”  Most enterprises still make decisions about Hadoop separately from decisions about other elements in the warehousing mix, and there are currently few good reasons to change that behavior.

Rana El Kaliouby of Affectiva presented an excellent example of analytics and Big Data working together.  Affectiva uses streaming facial recognition to capture millions of data points as consumers react to content, and uses machine learning algorithms to draw insight from the data.  By mapping the streaming data to emotional states, they can identify what content resonates with consumers.

Several of the sponsored topics in the plenary sessions were quite good, including presentations by MapR, Intel, ClearStory and IBM; others were about what one expects from sponsored presentations.

There were also a number of entertaining presentations that had little to do with Big Data.  Shankar Vedantum of NPR, for example, spent ten minutes sermonizing about the propensity of the human mind to select facts that confirm existing biases, and selectively used facts to illustrate his point.  He should have paid attention in “Research Methods 101”; at best, his point seemed trite, like telling a convention of nutritionists that “dieting is hard.”

Eli Collins of Cloudera delivered the obligatory “ethics and Big Data” piece, in which he argued that we should “use data for good”; his piece was immediately followed, ironically, by a presentation about using facial recognition to get people to buy more candy.  Everyone agrees that doing good is a good thing, but a technologist delivering a sermon is as silly as a Baptist minister lecturing on Oozie.