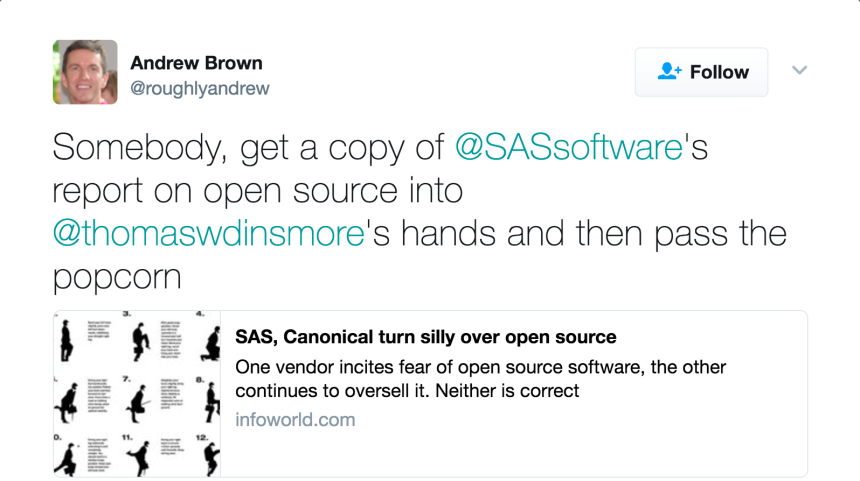 The report opens with this:

Open source technologies, like Hadoop, R, and Python, have been vital to the spread of big data.

That’s quite an admission for SAS, a company that embraces open source the way Donald Trump embraces Angela Merkel. You may remember this comment by SAS executive Ann Milley a few years ago:

We have customers who build engines for aircraft. I am happy they are not using freeware when I get on a jet.

That comment drew a lot of attention. Astute observers pointed out that SAS bundled Apache Tomcat and other open source software into its products. Hilarity ensued.

(2) But first, a parade of horribles.

SAS wants you to know that open source users are in for a heap of trouble.

Deploying open source software at an enterprise level is challenging.

Commercial software, on the other hand, is so easy to deploy a caveman can do it. Just ask anyone who implements SAP.

Projects may be derailed by the requirement to scale up to operational levels of reliability and performance using a complex set of open source tools – tools that require coding experts who are notoriously hard to find.

You know what’s even harder to find? Data scientists who use SAS.

The report continues by quoting former SAS executive Robin Way. Robin currently leads Corios, a consulting firm with Gold status in SAS’ partner network; he has spent his entire career working for SAS and its partners.

Not that there’s anything wrong with that.

Robin details the trials of those who venture down the open source path:

Four years. For a roadmap. They should have hired me.

…but decided that the total cost of ownership would be more expensive than using a single consolidated platform…In this case, the platform chosen was SAS.

There are some good reasons to use SAS. Saving money is not one of them.

In another example, an insurer may have to abandon 18 months’ work after standardizing all new model development in Python and all model deployment in Scala. Despite substantial work, none of their Scala model translations match the results from their Python model development, and nobody in the company knows how to fix this problem.

That story is ridiculous on multiple levels:

— Nobody spends 18 months building code without testing the solution first.

— Why bother to translate Python to Scala? Just deploy the Python code.

— Better yet, train models in Apache Spark or H2O from the Python API and deploy them as POJOs under the Scala API.

We’re expected to believe that this insurance company was totally hot for open source Python and Scala, but never heard of Spark and H2O? Please.

Meanwhile, here’s what Gartner says about implementing and managing SAS:

The SAS products considered in this Magic Quadrant are difficult to manage. Over half of SAS’s reference customers pointed to difficulties with the initial deployment or version migration. Several indicated instability and bugs.

The anecdotal evidence is mounting that the true costs of open source are not necessarily understood and that organizations are underestimating the range of considerations when it comes to deploying these systems and keeping them operational.

That sentence would be more credible if it were supported with, you know, actual anecdotes.

Many organizations aren’t taking into account all the relevant factors when it comes to the true cost of open source, leaving them potentially exposed – for example, only half currently take into account the time to fix/resolve issues…

SAS, of course, is completely free of defects and never requires time to fix/resolve issues.

…and a minority (41%) contemplate the need to replace expertise if employees leave.

This is a very silly point. There are more people in the job market with open source skills than with SAS skills.

I like that part about “widely accepted.” Here in Boston, one of the big insurance companies has a large investment in SAS. Every junior data scientist they hire already knows R, and most know Python. For SAS, however, they have to send them out for training.

SAS’s pricing remains a concern. Open-source data science platforms are often used along with SAS’s products as a way to control costs, especially for new projects.

With SAS, you don’t have to worry so much about “hidden” costs. They’re right out front, staring you in the face, every time you get an invoice.

Does SAS seriously believe that open source software poses a security risk? If so, they wouldn’t want customers to install their software on open source operating systems, since a software stack is only as secure as its weakest component.

The following operating systems are supported:

I guess they’re still working on the Windows version.

Presumably, SAS doesn’t want you to install Viya on a free version of Linux:

That’s kind of a soft disclaimer, isn’t it? It’s standard CYA boilerplate, not “Russian hackers will rob you blind if you put this on Debian.”

Let’s move on to supported databases. Hackers rarely target analytic applications, because the workloads are transient. But a hacker might want to use an analytic tool to get inside a database to mine the really good stuff. SAS leverages database security, so I assume it only works with commercial databases, which, as you know, are totally unhackable:

So much for that theory.

But at least with open source databases, the risks are out in the open. I’m sure that Viya has no open source dependencies:

The Java Runtime Environment (JRE) must be installed on every machine in your deployment. Only the JRE is required, not the full JDK. The following versions are supported:

Note: This open-source version of Java is included with Linux.

Security is paramount to SAS. They wouldn’t use open source software for that.

The deployment automatically installs Apache httpd from Linux repositories if it is not detected on the machines that you designate as targets for the HTTP Proxy installation. Apache httpd is required to create the Apache HTTP Server, which provides security and load balancing for multiple SAS Viya components

I’m flying to Amsterdam in September. I sure hope KLM doesn’t use SAS.