Light news this week — everyone is catching up from Spark Summit, it seems. We have a nice crop of explainers, and some thoughts on IBM’s “Data Science Experience” announcement.

On his personal blog, Michael Malak recaps the Spark Summit.

Teradata releases a Spark connector for Aster, so Teradata is ready for 2014.

On KDnuggets, Gregory Piatetsky publishes a follow-up to results of his software poll, this time analyzing which tools tend to be used together.

In Datanami, Alex Woodie asks if Spark is overhyped, quoting extensively from some old guy. Woodie notes that it’s difficult to track the number of commercial vendors who have incorporated Spark into their products. Actually, it isn’t: 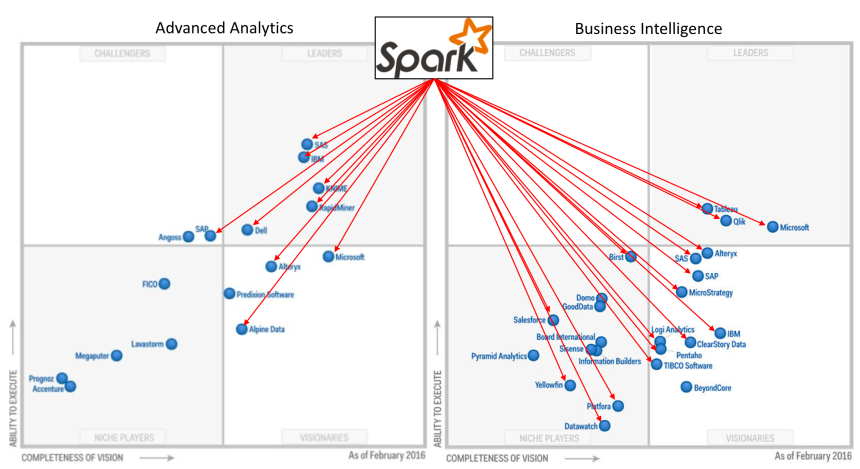 And yes, there are a few holdouts in the lower left quadrants.

Unless you attended the recent Spark Summit with a bag over your head, you’re aware that IBM announced something. An IBM executive wants to know if I heard the announcement.  The answer is yes, I saw the press release and the planted stories, but IBM’s announcements are — shall we say — aspirational: IBM is announcing a concept. The service isn’t in limited release, and IBM has not revealed a date when the service will be available.

It’s hard to evaluate a service that IBM hasn’t defined. Media reports and the press release are inconsistent — all stories mention Spark, Jupyter, RStudio and R; some stories mention H2O, others mention Cplex and other products. Insiders at IBM are in the dark about what components will be included in the first release.

Bottom line: IBM’s “Data Science Experience” is a marketing wrapper around an existing service, with the possibility of adding new services that may or may not be as good as offerings already in the marketplace. We’ll take another look when IBM actually releases something.

— In TechRepublic, Hope Reese explains machine learning to smart people. For everyone else, there’s this.

— Arthur Cole wonders if open source software will come to rule the enterprise data center as a matter of course. The answer is: it’s already happening.

— Databricks announces availability of its managed Spark service on AWS GovCloud (US).