On August 6, 2012, Teradata released its earnings report for the second quarter of 2012.  Results excelled; revenue grew 18% and earnings per share (EPS) increased 28% over the previous year.

Teradata seemed poised to profit from the tsunami of Big Data hitting enterprises everywhere.  Soon thereafter, in September, 2012, Teradata’s stock price hit $80, up more than 500% from a low in November 2008.

That was a high water mark for Teradata.  In the third and fourth quarters of 2012, sales grew at single digits rather than double digits.  While company insiders whispered about missed sales targets, Koehler remained optimistic: “Teradata’s competitive position has never been stronger, and we are well positioned with our market-leading technology.”

After leveling off in 2014, Teradata’s product sales fell again by double digits in 2015.  In August, 2015, company employees reported several rounds of layoffs.

Since August 6, 2012, Teradata has lost 75% of its market value, a little less than $10 billion in value destroyed.  Adding insult to injury, Fortune dropped the company from its list of Most Admired Companies.

About two weeks ago, on February 4, Teradata held an earnings conference call for investors and analysts.  A questioner asked Koehler under what conditions Teradata would grow again.

He couldn’t answer the question.

The chart below illustrates how Teradata hit a wall in 2013, with flat revenue after years of rapid growth. 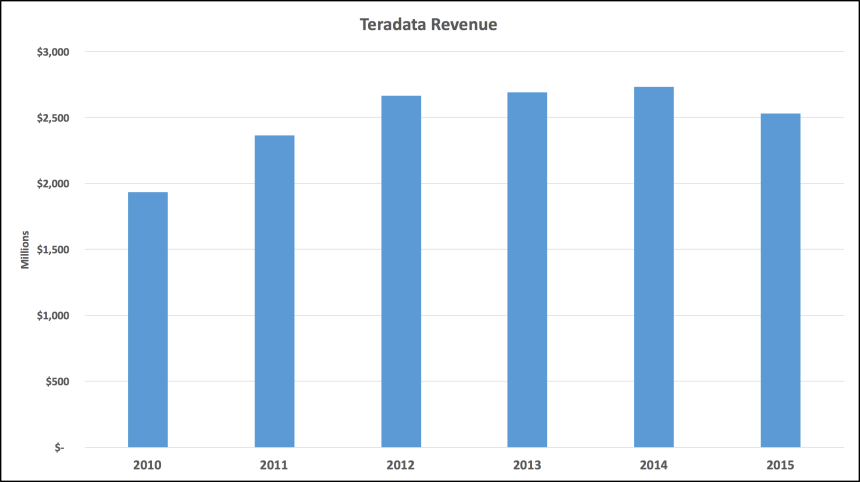 — Product revenue: sales of licenses to use Teradata’s databases on boxes.  Sales of perpetual licenses, Teradata’s preferred licensing model, are booked as revenue on delivery of the license.

The chart below highlights the decline in Teradata’s product revenue.

Product revenue is the critical measure of Teradata’s business, because it drives the other two categories.  Captive consulting operations in companies like Teradata tend to be product-centric, relying on product sales to drive business in installation, configuration, training, warehouse builds and so forth.  The value proposition differs markedly from independent systems integrators, who position themselves as vendor-neutral.

Consulting revenue isn’t exactly correlated with product sales due to differences in revenue recognition.  Suppose that Teradata sells a large data warehouse project, with a total value of $X in product licenses and $Y in consulting services.  It will take several quarters to complete the project.  If the deal closes in the fourth quarter, Teradata recognizes the product revenue immediately, but recognizes the consulting revenue over subsequent quarters as the work is performed.

That is why Teradata’s consulting revenue continued to increase in 2013 while product revenue declined, as consulting teams worked off the backlog of projects sold in 2012.  Unlike other vendors like IBM with significant consulting businesses, Teradata does not report the size of its consulting backlog. 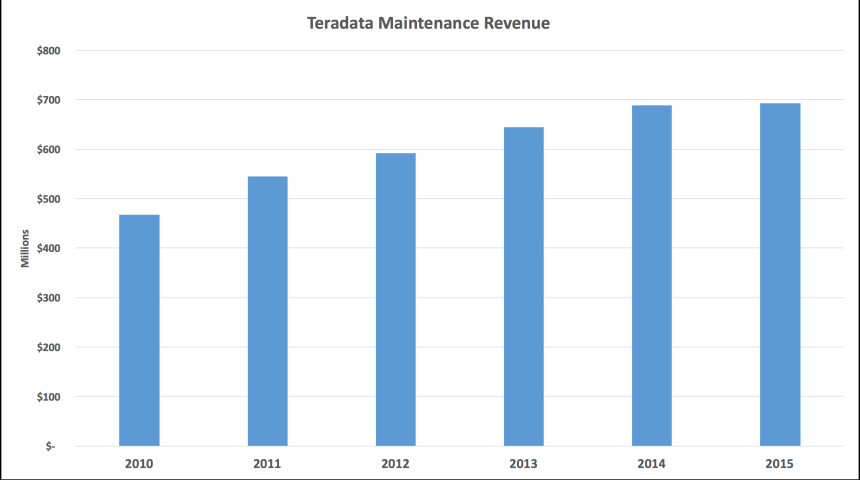 Bear in mind, though, that Teradata sold more than a billion dollars of product in 2014 and 2015, so maintenance should be increasing by $150-200 million a year.  Since maintenance revenue did not increase, the implication is that all or most of those sales were replacement business that did not expand the Teradata footprint.

Why Teradata Hit a Wall

Why did Teradata stop growing?

Management blames external factors, including a strong dollar, a soft economy, soft capital spending, long sales cycles and tight IT budgets.  These factors are real, but they do not explain Teradata’s sales weakness.

Currency movements affect commoditized products more than those with a strong customer franchise, since the vendor cannot sustain volume in the face of higher prices in the local currency.  All firms must deal with the same currency environment, but firms with a compelling value proposition grow anyway.  Apple sells a lot of product in non-dollar currencies, and its revenue is affected by a strong dollar; but Apple’s management does not whine about the strong dollar.

Soft capital spending affects big-ticket items like perpetual licenses for big-box data warehouses.  One solution, of course, is subscription pricing.  Many software companies, including leaders like Oracle and IBM, figured this out a long time ago, but Teradata has resisted except in its own Cloud.

Tightening IT budgets mean that vendors must work harder to demonstrate value and stay on the organization’s “must buy” list.  If Teradata is losing sales when IT budgets are tight it is because Teradata has failed to define a compelling value proposition. and it has failed to persuade the customer that it can deliver value.  Tight IT budgets are a reality, and will continue to be a reality; Teradata must offer solutions to the customer that solve that problem.

It’s also important to note that while worldwide IT spending declined in 2015 (according to Gartner), the biggest decline (by far) was in communication services.  Meanwhile, IDC reports that worldwide dollar-denominated spending on Business Analytics software has increased every year since 2012.  IT organizations may be cutting back in some areas, but spending in Business Analytics remains strong.

In other words, organizations are buying.  They’re just not buying Teradata.

The first reason is market saturation.  Virtually every enterprise that ever will invest in a conventional data warehouse already has one; those that don’t likely never will.  Koehler says that one pillar of Teradata’s growth strategy will be selling to the “thousands of companies that do not use Teradata.”   There’s an obvious problem with that approach: those companies aren’t using Teradata because they are using Oracle, DB2, SQL Server or something else, and they’re not going to toss what they have and buy Teradata just so Koehler will get a performance bonus this year.

The second reason is the maturation of Hadoop.  In Hadoop’s early years, most data architects imagined Hadoop as a kind of dumping ground for data, with batch processes to structure the data and load it into high-performance relational databases.  End users would work primarily with the relational databases, where they could have sub-second query responses, while Hadoop would serve as a batch ETL platform.

As Hadoop matures, however, that model is obsolete.  Tools like Impala, Hive-on-Tez, Spark and Drill deliver query response times that approach those that can be achieved with relational databases.  OLAP-on-Hadoop platforms like Kylin and AtScale make it possible for end users to point familiar tools like Excel and Tableau directly at Hadoop.

Given the disruptively low costs of Hadoop compared to Teradata, anything that makes Hadoop more “enterprise-ready” cuts into Teradata’s franchise.

Structured data in a high-performance database remains the gold standard for high-value data.  However, most of the data that makes up the Big Data tsunami is data whose value is either unknown or speculative.  In the past, it would have been discarded, but low-cost storage makes it possible to retain it and mine it for value.  Low cost platforms are inherent in the DNA of Big Data, and Teradata, like Downton Abbey and its army of servants, symbolizes a different era.

Going forward, most of the growth in data warehousing will be on top of Hadoop and NoSQL datastores.  High value data will move to in-memory databases; conventional relational databases will not disappear, but will decline in importance.

Business schools used to teach two models for public companies: the growth company that retains its earnings and rewards shareholders through capital gains, and the stable profitable company that rewards investors through dividends and share buybacks.

Today, there is only one model for public companies: grow or go.  Companies that do not articulate a growth strategy do not survive.  Tax and other incentives drive the public equities markets to demand capital gains through growth.  Stable cash-generating businesses either finance themselves through private equity, or they become cash cows within larger and stronger public companies.

Teradata has the potential to be a stable and profitable company. Its gross profit margin has declined a bit in recent years, but the company generates cash like Kim Kardashian generates tweets.  Its operating loss in 2015 is attributable to a one-time accounting charge related to the proposed sale of Aprimo, the Marketing Resource Management company it acquired in 2011.   If Teradata continues to serve its existing customers with product upgrades, extensions and consulting services, the $2.5 billion in total revenue produced in 2015 should be sustainable for some time.

But stable companies can’t structure themselves like growth companies.  Companies with a clear growth vision can invest heavily in sales, marketing and engineering; stable companies must be lean.  Teradata now spends more “below the line” — engineering, sales, marketing, general and administrative functions — than it did in 2012, when it seemed poised for growth.  Management talks about “restructuring” and “transition”, but it does not appear to be actually restructuring anything.

Meanwhile, while the company invested a little over $600 million in research and development over the past three years, it spent $1.6 billion repurchasing its own stock.   Many companies repurchase their own stock to avoid dilution from stock-option grants, and because it is a more tax-efficient way to reward investors.  However, while companies like Apple spend a fraction of their operating cash flow on share repurchases, in the first three quarters of 2015 Teradata spent more on share repurchases than it produced in operating cash flow, borrowing to cover the difference.  Effectively, Teradata is performing a stealth leveraged buy-out.

A company that spends three times as much buying its own stock as it spends on R&D is a company that has no confidence in the growth potential of its own business, and no ideas for building a better product.